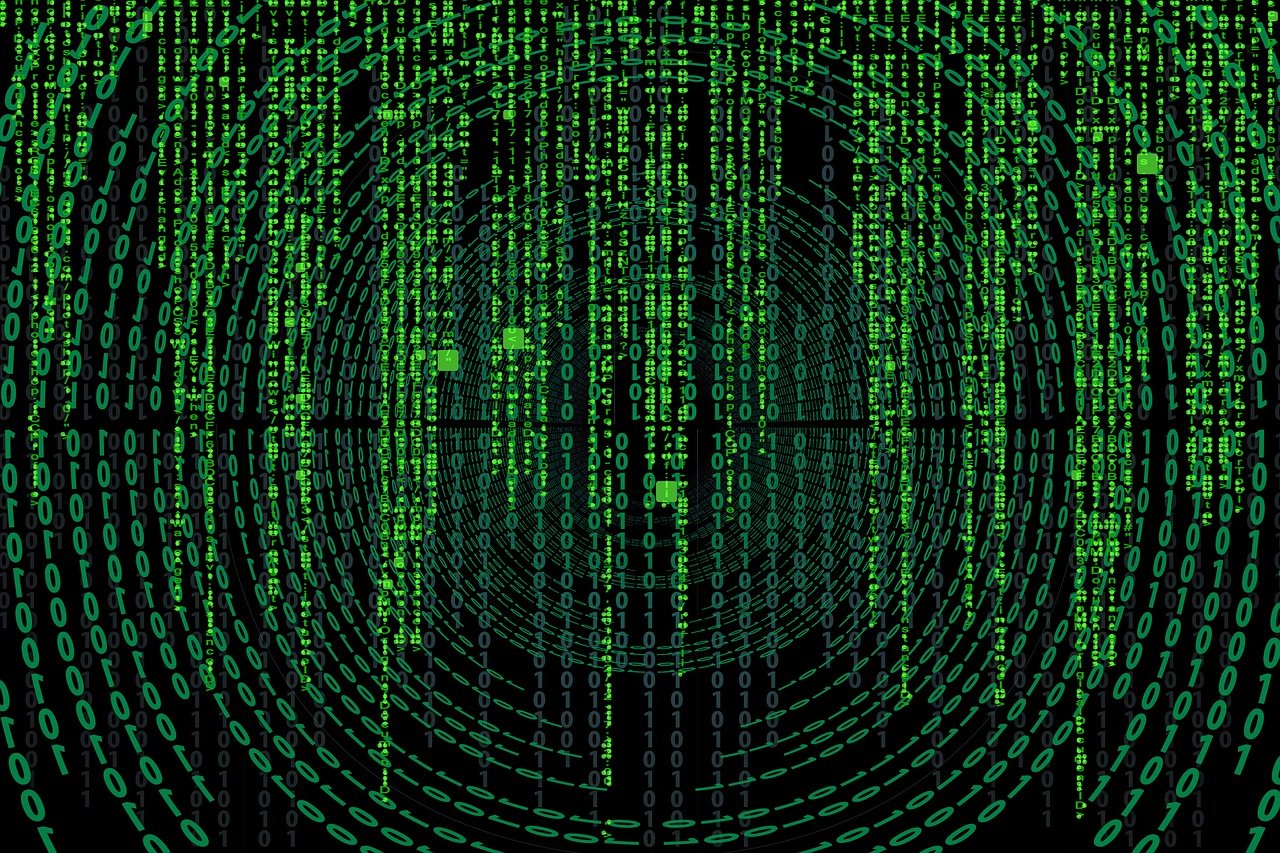 Stop. Say it again aloud but with some confidence as if you have someone narrating your life as a movie.

We hear about data all the time. Whether it be analyzing a COVID curve or an artificial intelligence trend, it is vogue to say “show me the data” in a country that failed to produce adequate STEM graduates for the past twenty years and now has to erect signs that read “Science is Real.” We’ll discuss science more later.

Here’s the data you sought. Just pretend you have the data; now pretend you are a good cybersecurity professional and protect the data. If you protect your data, you are taking a step toward protecting your cognitive security, or your ability to make sound and confident decisions.

In the Information Age, data is king. Prioritize, share, analyze, protect, etc. your data. The data, your data, is a pile of binary ones and zeroes that, when amassed and assimilated, becomes information. Information becomes knowledge. Knowledge leads to ideas. Then, leaders can make good decisions on big ideas. Got it – no kidding.

However, ideas aren’t binary. More and more, though, I see, read, and hear of binary comparisons and absolutes. In the era of the politicization of everything, one has to choose a side. Each choice – cars, clothes, phones, memberships – is tantamount to an indictment of one’s self-worth and contributions to humanity. Choose one or the other but never both or parts.

The most obvious binary comparisons are in U.S. domestic politics. This being an election year, political binarism is in full swoop as the following examples display:

Go further with it and consider how many times you may have seen or heard these other screeding comparisons.

Somehow, a capitalist economy like the United States’ economy can’t have social democratic programs like, say, Social Security, Unemployment, or Medicare. The prevailing questions are really whether the country should have another program for all and, if so, how to resource it. If the U.S. were to have a national healthcare system, the U.S. wouldn’t become a socialist state, nor would capitalism cease to exist instantly. Likewise, to change the economic model would jeopardize the ability to resource the large programs. Just because one declares this to be a post-capitalist era doesn’t mean it is. Yet, one might think Lenin is waiting to step to the presidential dais and order Howard Hughes and friends to the Gulag.

This always has been a curious comparison as educators have equated nationalism to 1935 Germany’s Nationalsozialistische Deutsche Arbeiterpartei, or the Nazis. Of course, nobody wants to be like a Nazi, so we can avoid nationalism because it’s bad. Many great Americans feel that they must scamper about denying they are Nazis and defending their positions as patriotic flag wavers. Since when did we need to do that to display our flag? Please. It isn’t necessary to defend wearing or waving the Stars and Stripes.

Meanwhile, one doesn’t want to be a Nazi, so one should want to be a globalist who is all-tolerant and all-accepting. As Secretary Kissinger asserts in his book World Power (pg. 93) when discussing global and national trends in Europe, “EU policies enshrine tolerant inclusiveness, approaching unwillingness to assert distinctive Western values, even as member states practice politics driven by fears of non-European influxes.” One could say the same for the U.S., where many citizens preach open borders and tolerance for immigrants, but don’t insist that newcomers abide by U.S. values such as, oh, educating their daughters or not trafficking people for sex.

Then, there is my favorite binary comparison.

There I was, hanging out as a member within an email forum – arcane, I know. Yet it was an august nominee- and invitee-only distribution forum with some peers and a former deputy secretary of defense. The forum kicked the can about on strategy, policy, and the like without getting into the partisan politics of which party was right or wrong. Nobody ever discussed politics nor pointed fingers at political figures nor administrations. Policy without the politics nor preference. I mostly shut up and listened unless the topic was cyber or information operations.

Then, one day it happened.

While discussing the COVID response and repercussions a new member pushed the buttons. To paraphrase his pompousness, it went like this: “COVID will be the death knell of globalism, blah, blah, blah, and finally we will see the triumph of science over religion.” After that, the forum asked questions, and he responded by questioning others’ intellect. Some wanton conspiracies emerged, and just like that the forum went dark, possibly infiltrated by a DoD retiree troll – not me – who hit the daily double of binary arguments.

Sure. Globalism might slow because of COVID, but it is no death knell. The world will continue to shrink metaphorically. As for science triumphing over religion for COVID, well, yeah, but that doesn’t mean it is one or the other.

The COVID crisis started around the beginning of Lent which marks the start of the temptation of Jesus Christ in the desert. In the second temptation according to Matthew 4:5-7, Satan takes Jesus to the pinnacle of the temple and challenges Jesus, “Throw yourself down; for it is written: ‘He will give his angels charge concerning you; and, on their hands they will bear you up, lest you strike your foot against a stone.’” In turn, Jesus replies, “It is written, ‘You shall not tempt the Lord your God.’” Even two thousand years ago, people understood you didn’t mess with the laws of nature.

Jesus could have been more prophetic by declaring, “For it shall be written, that one shall not challenge the principles of Newtonian physics as force equals mass times acceleration and the derivative of the same proves that momentum equals mass times velocity whereby, were I to leap from the temple pinnacle, gravity would pull me down at 9.8 meters per second squared as to accrue a linear velocity that the mass of my body would strike the earth and stone below me at such a rate the unyielding ground would cause an inelastic collision whereupon my skeletal structure and brain matter would shatter amongst the energy transfer and the resulting angels of the Lord might not look favorably upon me. Of course, Newton won’t prove this for another seventeen hundred years even though the principles have existed since the creation of Earth and are essential to life as we know it on the planet. Pure coincidence, you might think, Satan.” 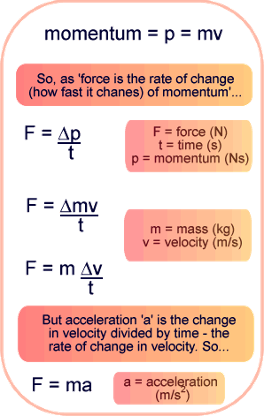 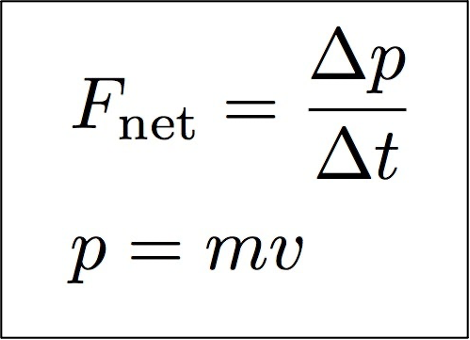 Choose either image for understanding the relationship of Force to Momentum.

Still, some walk around saying God will protect them from COVID even though viruses, natural or genetically engineered, function via certain principles that make them transferable and harmful to some but not all. So, one might get COVID simply for tempting the laws of nature. The Amish of Pennsylvania won’t wear masks living by the mantra “Thy will be done,” which is an altogether different religious philosophy matter that doesn’t challenge science whatsoever.

Anyway, the point of all of this is that science and religion, capitalism and socialism, globalism and nationalism can all co-exist and share similar spaces. In reality, very few all-or-nothing positions exist in the world, except in U.S. domestic politics whose two primary belligerents continue to defy any truth.

A colleague wanted to be involved in local politics and so joined what she thought was a like-minded party. At one meeting she attended, the party members were building the party platform. Fracking, a popular topic in Pennsylvania, was the focus. The prevailing position was to be on the opposite side of the main opponent. As my colleague noted to the group, fracking is very important to business in this area, and maintaining a clean environment is important to many other citizens. Why not stake out a position in which fracking is allowed when it meets verifiable standards?

Nope. The other members promptly shouted down her response. The party position had to be the opposite of the opponent. She departed shaking her head and never returned. “They are all fanatics,” she told me.

Maybe when the election is over our collective emotions will settle enough to apply some reason to solving complex domestic issues. Maybe then we can have a degree of sanity restored, and I at least can get back that part of my cognitive security.

For now, though, I’m just shaking my head.

Some degree of Sanity????

One can hope for a measure of sanity.

Only God knows and He is not squealing. You aren’t ready for the answer, yet!

Excellent. It truly is not a binary world alas human nature seems somewhat fixed and we are ‘clannish’ creatures. The way to overcome this is through exposure to other people, places and ideas which, sadly seems to be becoming less likely.